There have been excursion boats built and operated in the Saugatuck/Douglas area since the late 1860’s. The Kalamazoo River proved to be a tranquil river that was excellent for launching boats, and was easily accessible to Lake Michigan, as the mouth of the river was only one mile from Saugatuck.

The Queen of Saugatuck was built in a small machine shop called the “Shag Shop” about three miles east of Saugatuck. The Queen of Saugatuck’s original plans were purchased from Dick Hoffman, for his second boat, the Island Queen. The rough drawings were modified and updated to meet current US Coast Guard regulations. After an approved set of plans were received, construction began at the Shag Shop. It took approximately one year to finish welding the hull and fitting her out. She was trucked down Old Allegan Road to Saugatuck Marine, just off Blue Star Highway, where she was launched on July 7th, 1978. She was then towed by the tug R.B. Long, to her dock at 716 Water Street, where she was finished being outfitted and went through her Coast Guard inspections and stability testing. 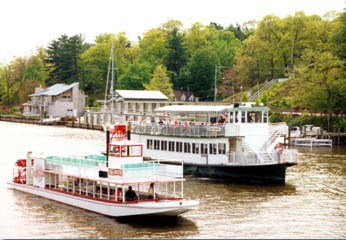 The Queen of Saugatuck was 14 gross tons, 12 net tons, 57 feet long, 14 feet in beam, and 2.4 in depth, and held 82 passengers, plus a crew of two. She had a single paddlewheel at her stern. After being in service several years, the wheels were split to allow additional maneuverability of the vessel. In 1992, the vessel’s name was changed to Star of Saugatuck to incorporate the use of the family name. The Star was used until June of 2000, when Star of Saugatuck II went into service. In May of 2002 she was sold and trucked to Waco, Texas, and renamed Spirit of the Rivers. She sunk in 2008 but was salvaged. She has been renamed the Brazos Bear and is currently privately owned.

Star of Saugatuck II had been a work in process for many years. Desiring a larger boat with an enclosed lower deck to be more passenger friendly in inclement weather, plus the boat needed to be a sternwheeler; numerous designs were looked at, to find just the right one. After a trip to New York to look at a sternwheeler, the right design was found that would be suitable for operating in the Saugatuck harbor.

A set of basic plans were purchased, and upon meeting Greg Beers and two of his colleagues, (Greg is currently the president of Bristol Harbor Group in Rhode Island) who were finishing their masters in marine architecture, took on the project of developing a set of blueprints and crunched all the numbers to submit to the Coast Guard for their approval. The plans came back with a few minor changes required; the plans were sent off to Boston for review from John Gilbert and Associates. The required changes were made, the numbers verified again, and the plans were sent off to Coast Guard headquarters for approval. This process alone took just over 18 months to complete.

The Shag Shop, once again, was the boat builder. The first truck load of steel to arrive was 80,000 pounds. The Star II has just a little over 100,000 pounds of steel in her. On September 28th, 1998 the keel was laid for Star of Saugatuck II, and over the next 12 months she took shape and was assembled, then disassembled for launching.

On October 17th, 1999 she was trucked down Old Allegan Road, through the city of Saugatuck, and her hull launched at the Spear Street launch ramp, with approximately 100 people witnessing the launch. The hull was then towed over behind where the Red Dock sits today, where her paddlewheels were installed, and the main cabin and the pilot house put on the hull within the next 4 weeks. She was then towed back to her dock at 716 Water Street where the main cabin and pilot house were welded to the hull. Welding the main deck and pilot house to the hull was completed on New Year’s Day 2000.

The outfitting of the boat insulating the walls, putting in windows, canopy framework, bathrooms, and everything else that needed to be done continued through the rest of the winter. It was hoped that the Star II would be ready for the opening of the 2000 season, but it wasn’t until June 23rd, 2000 that she received US Coast Guard certification. 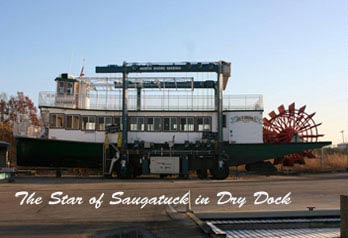 The Star II seats 150 passengers and crew of 3 – one captain and one crew for cruises with 54 or less passengers and one captain and two crew for cruises over 55 passengers. She weighs in at 51 gross tons, 41 net tons, length 64 feet + 11 feet of paddlewheel for an overall length of 80 feet; she has a 21 foot beam, and draws about 3 feet of water. Her enclosed lower deck seats 70 passengers, and has banquet style tables seating 6’s and 8’s, and cloth, padded chairs for seating. The upper deck seats 80 passengers, and has a partial canopy over the 2/3 of the deck. The seating on the upper deck is patio type furniture and table seating of 4 and 6. On the lower deck you will find two spacious restrooms. The men’s restroom also serves and a unisex handicap restroom.

Both Star’s are authentic sternwheeler paddleboats. The cruise begins at our dock at 716 Water Street, where you’ll travel upwards on the Kalamazoo River into Lake Kalamazoo (how far we go into the lake depends on water levels) where you’ll see the picturesque town of Saugatuck by water, back down the river, where you’ll see boats of all shapes and sizes, cottages to million dollars homes, the natural beauty of the area, untouched by development, and entering majestic Lake Michigan, (we enter Lake Michigan with permitting conditions), and then returning back to our dock. Trips take approximately 1¼ to 1½ hours, and there is a live narration which points out local landmarks, points of interest, as well as some history and local lore of the area.